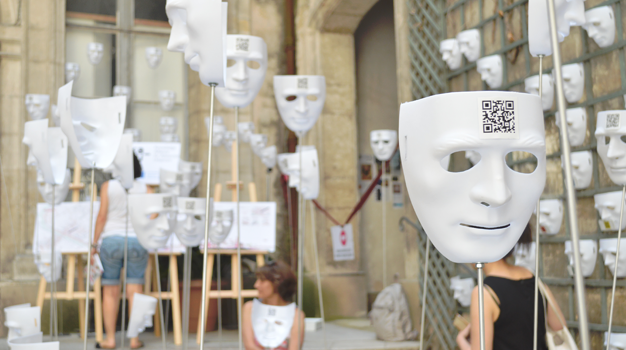 KA‐AU has hosted for three years three higher education institutions: ENSAM in Montpellier, IAAC in Barcelona and UNIGE in Genoa, associated with 5 companies and editions ACTAR URBAN NEXT and the Festival des Architectures Vives. This consortium is working on the impact of new technologies on the city, urban planning and architecture. The FAV2018 was an opportunity to share with the general public the state of research on the issue.

The dAD Team from UNIGE for FAV, directed by Manuel Gausa with dAD’s students and PhD students of ADD, presented an installation with the title: We are city, we are information… we are the inter‐faces.

The cities are the background of our daily life, that increasingly use technology in order to manage and offer better services to citizens. They become living laboratories where it is possible to experiment with new devices. The potential availability of data related to the implementation of multiple sensors and flows creates new opportunities; not only in monitoring but also in the way we draw, think and experience the city. The “big data” are thus at the service of the inhabitants and citizens, repositioning the man at the center of matter, experiencing a new idea of public space and meeting. Therefore, this new idea of space shared the installation matrix entitled: “We are city, we are inter‐faces”, proposed by KAAU and by the creative students of the University of Genoa.

The Project: The installation proposes a celebration of urban diversity and multiplicity starting from an anonymous and repetitive element like the mask, which is converted into an interface device and which, through processes of interaction with information, encourages changes and participatory dynamics aimed at creating new and different identities.

The anonymous element of the mask modified and implemented by different information takes on the role of face and inter / face, capable of reacting to the flow of data and adapting to changes, actions and personal incentives.

At the same time the installation proposes a critical reflection on the danger of standardization and depersonalization in the age of virtual society. The other aim of the project was to recreate an urban living room where was possible to share with the public the state of research. Different conferences from the KAAU team have been held in the installation site, at the Hôtel des Trésoriers de la Bourse, from 13 to 15 June 2018.