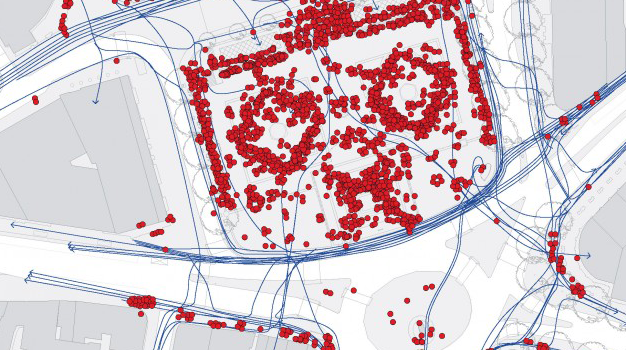 The network of public spaces in central London between Trafalgar Square and Parliament Square is the heart of national government and, for many, the heart of London. A masterplan for the area was commissioned in 1996 by Westminster City Council and the Greater London Authority, calling for improvements in the quality of the public realm, which – although of supreme historic importance – was perceived to be unpleasant, unsafe, and dominated by traffic.

Space Syntax provided an initial analysis of pedestrian activity patterns, which highlighted two key issues: Londoners avoided the centre of Trafalgar Square and tourists failed to make the journey between Trafalgar Square and Parliament Square. Our identification of these problems underpinned Norman Foster’s competition entry and helped his team secure the commission.

An example of real time information is Glasgow's Active Travel Demonstrator. App that aims to…

An example of a digital cultural installation is the Hello Lamp Post,  an experimental, city-wide…