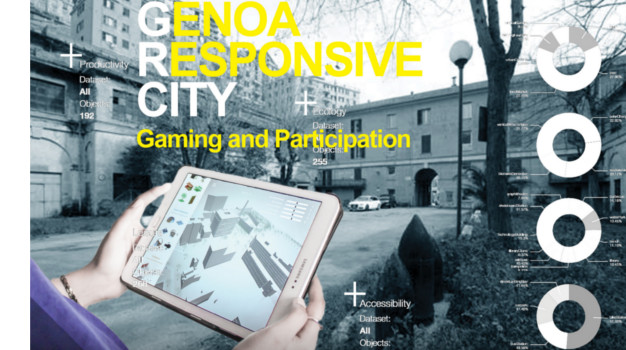 Genoa Responsive City
Gaming and Participation
Senior Faculty: Areti Markopoulou
Assistants: Andrea Quartara, Marco Ingrassia
If the physical structure and the image of the city have always been based on the technologies of production, communication and representation, how does Information era and communication technologies impact on the process of the design of the city?
We still design for the people, as we have educated to do, and we consider technologies as a possibility for designing in a more optimized way. At the same time, traditional limitations of how to integrate more actively citizens and communities in the design of their spaces are starting to be defeated by new design tools, highly interactive interfaces and intuitive processes.
Which are the design protocols, that allow the planning of an urban responsive organism, able to adapt and/or interact with its inhabitants? Can we implement such interaction from the very first steps of the design of the built and urban space?
Can we use responsive and gaming technologies for rethinking participatory processes on designing with the people?
The workshop claims an active role for both architects and users as co-designers of new urban relations, behaviours and operations through responsive and gaming technologies.
The sessions will focus on developing and understanding how gaming can become a tool for the designer for sharing and evaluating the design process through user’s feedback.
The case study of our work will be Caserma Gavoglio, engaging the neighbours’ associations that in the past they have worked in a participatory process that brought to interesting guidelines for the future regeneration of the area:
•     no new volumes
•     partial demolishment allowed
•     transversal connections with an urban park with embedded activities such as:
•     > sport facilities
•     > open air theatres
•     > urban orchards
•     > community spaces
Within the seminar, we will be using the Superbarrio gaming interface that has been developed at IAA MaCT in Barcelona. Students will be using the gaming interface during an experiment on site asking residents and users of the Caserma Cavoglio area to play and interact with it.
Final strategies and data visualizations will be the core of the Seminar that will collect the feedback of the users in order to map a series of proposals that will reflect the average wish of the users for the design of their public space.